Chichen Itza is not only one of the most remarkable and best-preserved archaeological sites in Cancun, but in the Yucatan Peninsula.

It is also one of the most mystical places in the Mayan world.

Chichen Itza holds ancient secrets, some of which have just been brought to light by researchers and archaeologists.

In this article, we will tell you about 9 facts about this archaeological site which has been awarded with the title of one of the Wonders of the Modern World. These facts will help you have a better understanding of what you will be witnessing in your next visit to Chichen Itza. 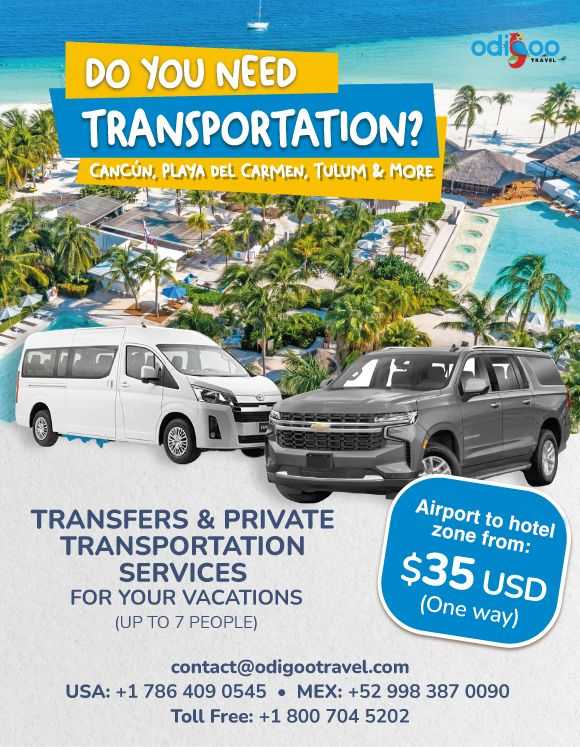 Architecture, astronomy, macabre discoveries, cruel rites... mysteries and secrets abound. If the ruins of Chichen Itza could speak, they would undoubtedly tell incredible stories, some fascinating, some terrifying. 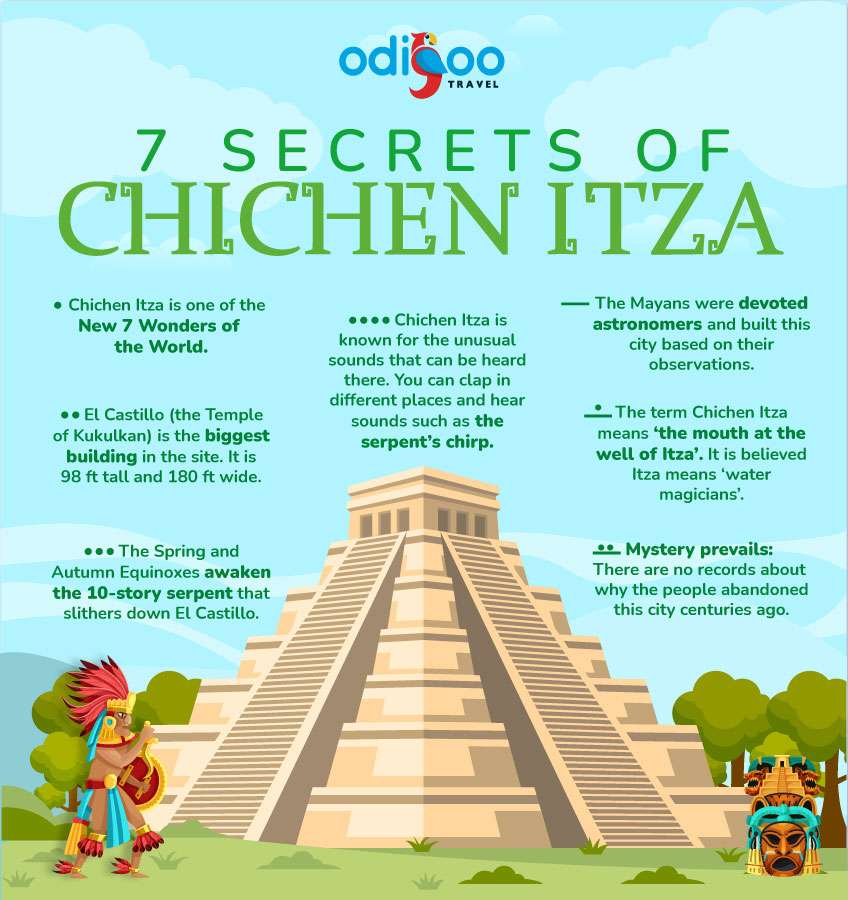 9: The Great Pyramid of Kukulkan is a 3D model of the Mayan Calendar !

Many guides will explain you this while you tour Chichen Itza. This is one of the main reasons why we always recommend a guided tour instead of just going by yourself. With a guide, you won’t miss out on this information and you will be able to have a better understanding of the site.

The phenomenon of astroarchitecture is one of the things you must pay attention to while you are in Chichen Itza.

The proportions of the Pyramid of Kukulkan are incredibly precise: its orientation in relation to the sun, the moon and Venus (a very important planet for the Mayans) is evidence of a very advanced scientific knowledge.

The cherry on the pyramid! This Mayan temple, thousands of years old, is actually a three-dimensional model of the Mayan calendar. 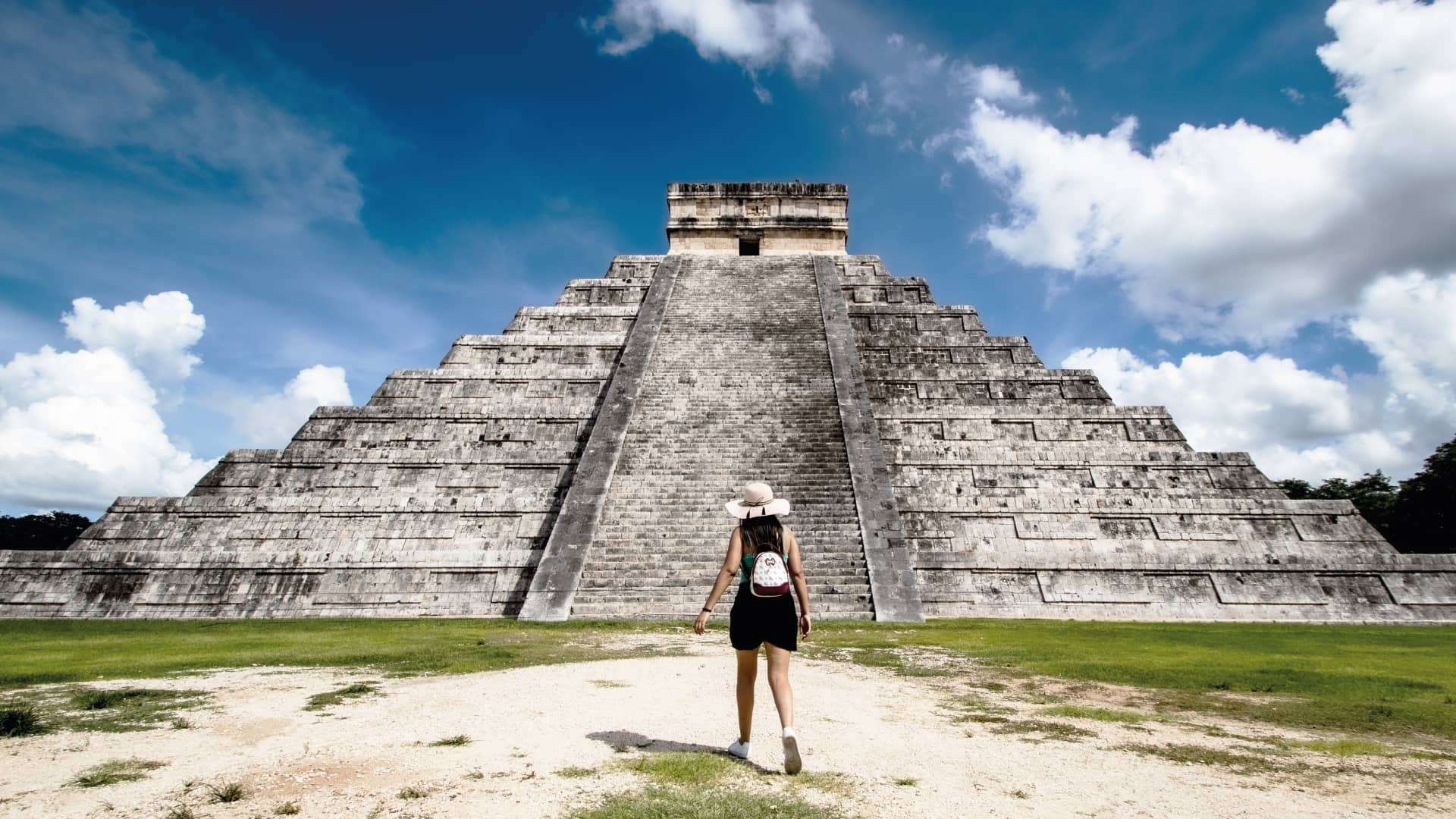 8: Chichen Itza’s location could be the center of the Mayan universe!

One of the most interesting recent discoveries about Chichen is related to an essential aspect of Mayan life: water!

In Chichen Itza, the cenotes are the only source of fresh water. These underground rivers are pure crystal water, a product of filtration through the limestone subsoil. Sometimes they also become open wells.

The most famous of these natural phenomena is the Sacred Cenote. It is thought that this cenote was the main reason the site was name as Chichen Itza since its foundation. In Mayan, Chichen Itza means “At the edge of the Well of the Itzáes”.

Need Transportation? Get a quote!

A source of life, but also considered as sacred places, cenotes are sacred and mythical places for the Mayans, they are a gate to the underworld!

Recently, other cenotes have been discovered in the vicinity of Chichen Itza. Most of these are hidden in the jungle. However, the amazing fact is that they are perfectly aligned to the four cardinal points of the great Pyramid of Kukulkan which is built in the exact center of their intersection! 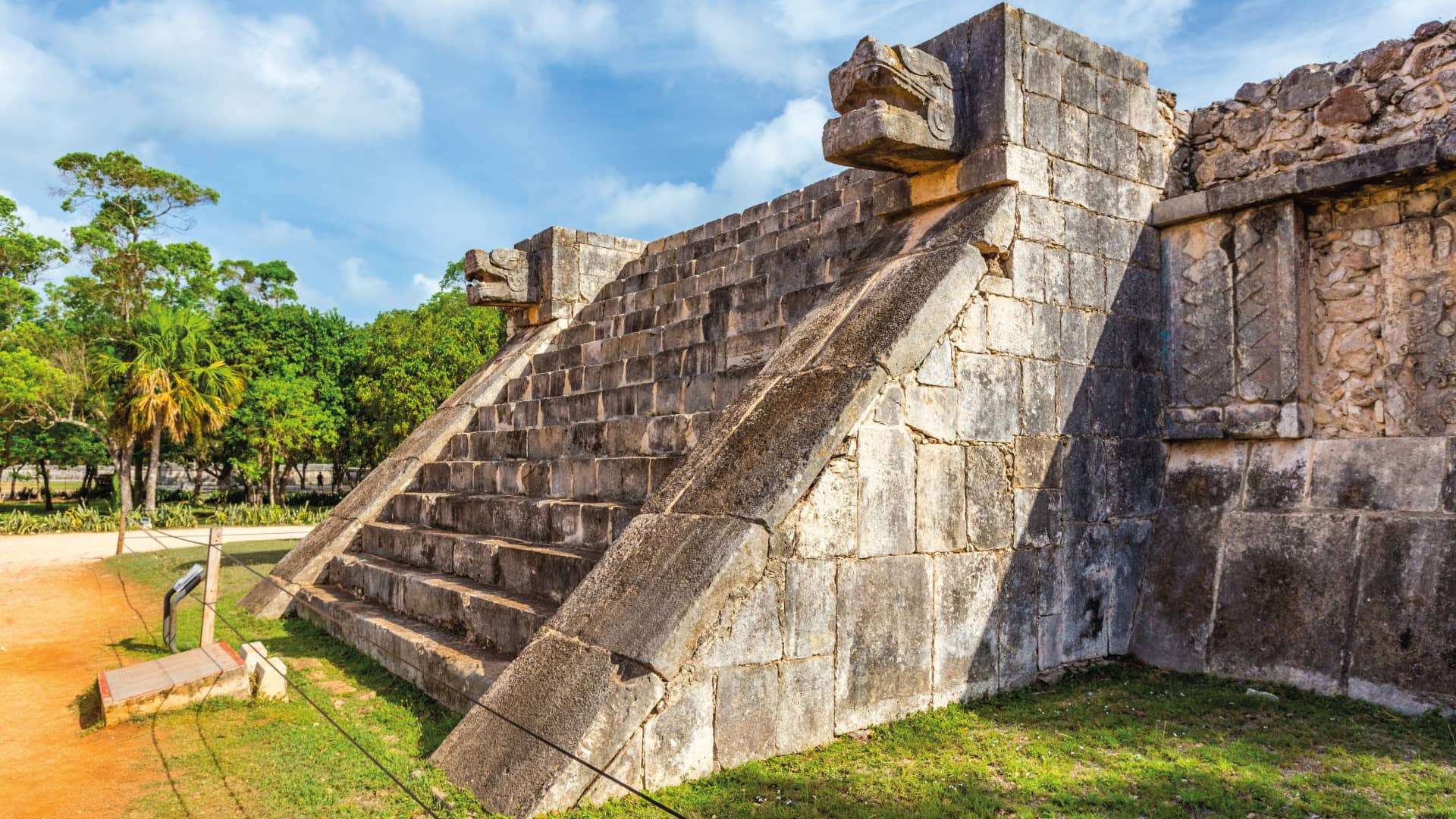 Therefore, Chichen Itza is thought to be a very powerful and mystical place. Perhaps even the core of the Universe in the Mayan World!

There are many incredible stories about Chichen Itza and many of them are related to the Sacred Cenote.

As we have already mentioned, the Sacred Cenote was a very important place for the Mayan people. This place was a gate to the underworld, the world of the dead. In addition, it was believed that the cenote was a meeting point for the Mayan gods. Therefore, it was a place where many rituals and religious ceremonies happened, even human sacrifices. 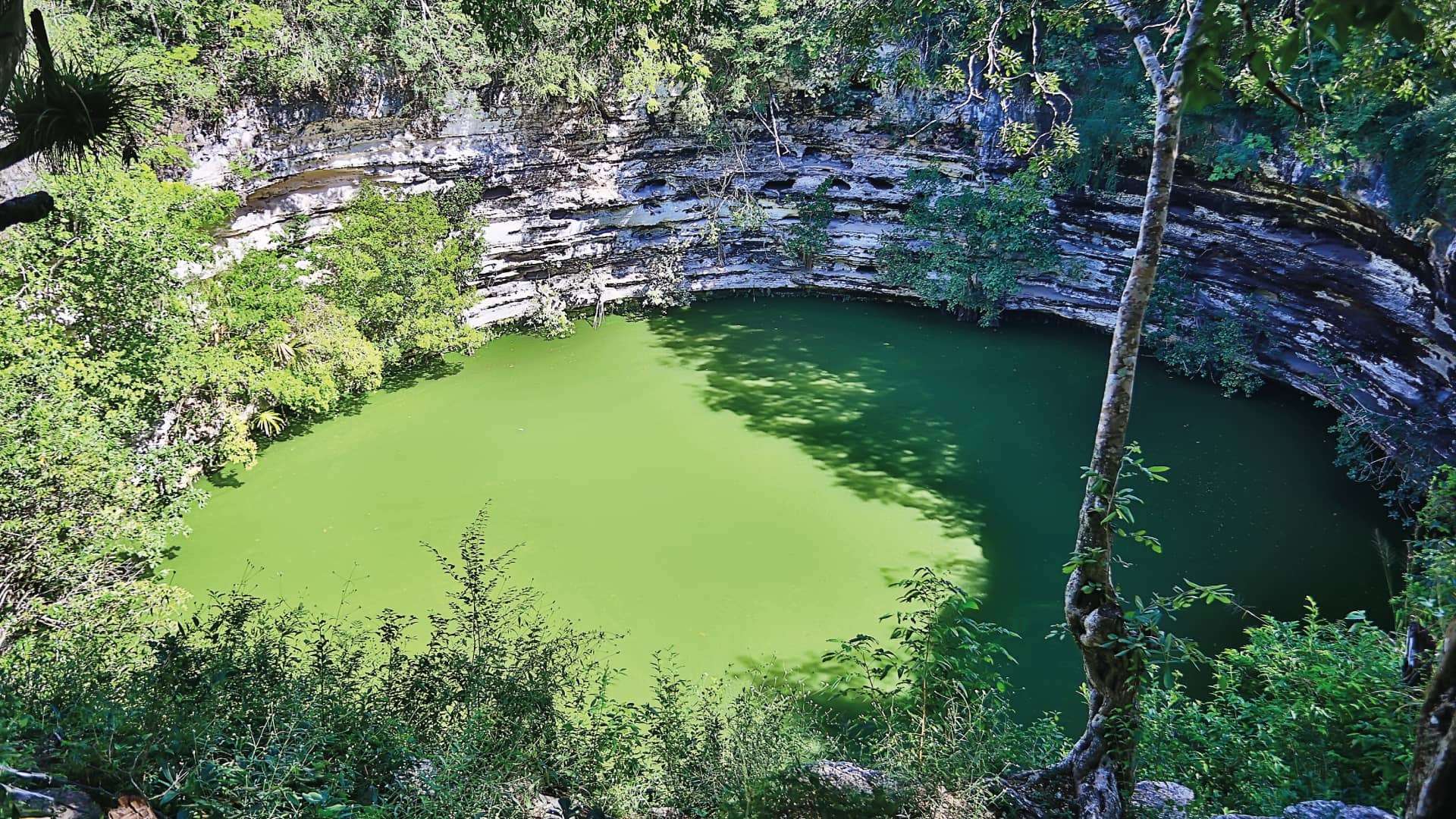 Researchers have been exploring all the corners of this cenotes since it was discovered. They have even dived. The first exploration mission was in the 19th century. It was done by an archaeologist in a diving suit. At that time, the main discoveries were ceramic and jewelry that presumably belonged to sacrificed victims.

In more recent investigations, human remains have been found in this cenote, mostly children and young women. This has been considered as strong evidence to prove that human sacrifices were done by the Mayans on this site. It is believed that the main reason for these sacrifices was to appease the gods, in particular the god of rain when long droughts hit the Yucatan Peninsula. The Mayans offered the most precious treasures to this god, their children and young virgins. They were thrown alive into the Sacred Cenote.

Unfortunately, all these human sacrifices were in vain. It is believed that, eventually, a drought came so brutal that it would end up causing the abandonment of Chichen Itza by 1400 AD.

6: Surviving a sacrifice turned a victim into a sacred being.

These stories about human sacrifices make the visit to the Sacred Cenote a bit scarier, especially when you have the chance to look down on it to contemplate each of its corners.

Imagine those hundreds of young women and children thrown from the top of the cliff into the depths of the Cenote. Many of them were covered in gold and jewels. A show that would undoubtedly be classified as cruel according to the way society works today. However, being chosen for a sacrifice was considered an honor for both the person and their family.

Sometimes it happened that one of the chosen ones survived the sacrifice at the Sacred Cenote. If the sacrificed woman managed to stay alive until noon by swimming in the middle of the cenote, then the gods considered her saved / forgiven.

Then the chosen one was brought back to the surface. From that moment on, she was revered by the entire community and became a priestess of the gods.

5: El Caracol, an observatory that tracks more than 20 astronomical phenomena

After we have dived into the center of the Earth, let's return to the light and the stars! Let's discover another incredible architectural phenomenon of Chichen Itza, the Observatory.

It is arguably the second most important building at Chichén Itzá just after the Great Pyramid of Kukulkán.

Its construction, like that of the Pyramid, is the product of precise calculations and the extremely advanced astronomical knowledge developed by the Mayans.

The Observatory, also known as “El Caracol” because of the shape of its staircase, is designed in such a way that it tracks more than 20 different astronomical phenomena. In fact, the architecture of this building is based on the movement of stars and planets, especially, on the sun and moon. 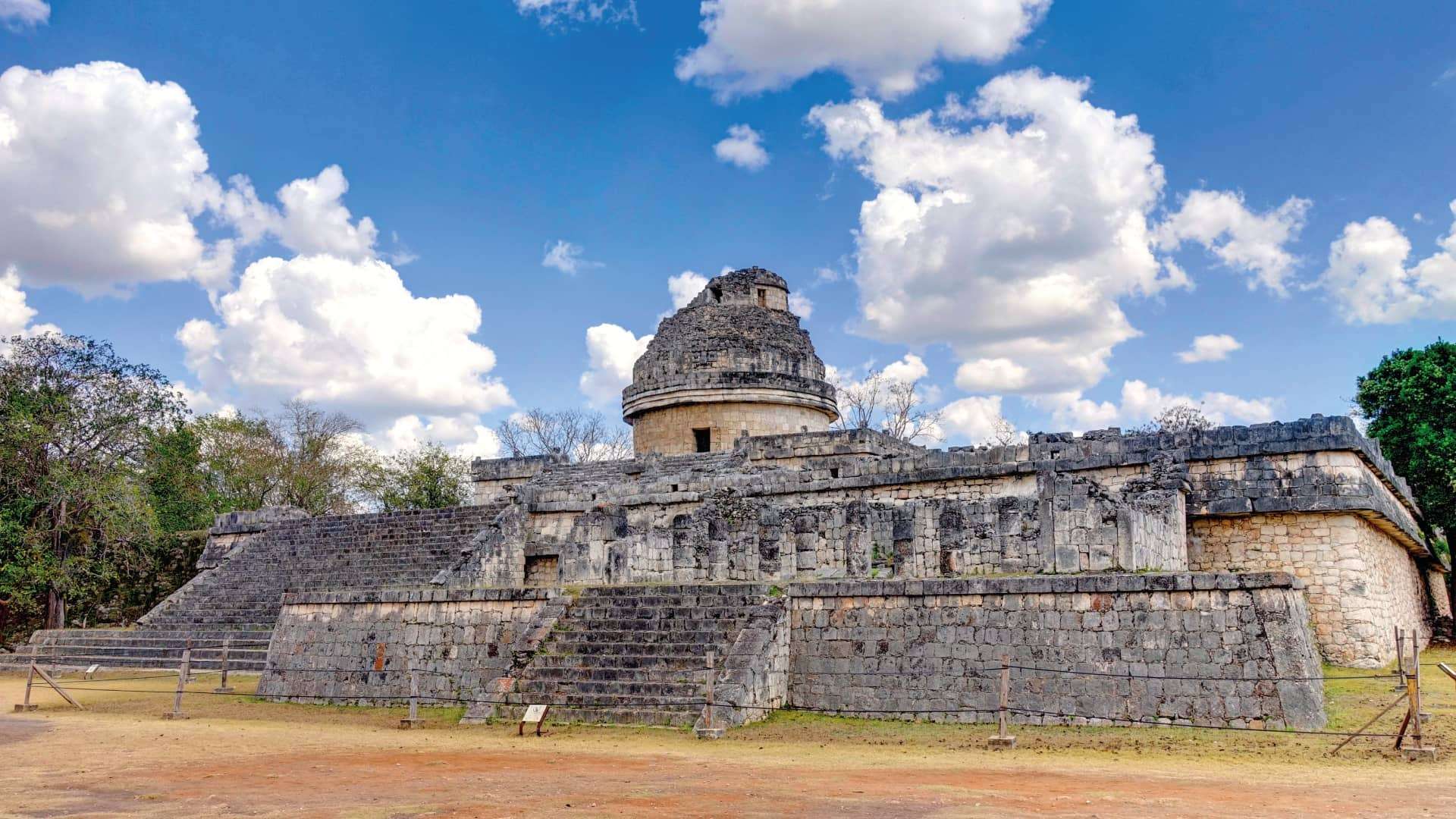 The rise of Venus, symbolized by the main gate of this building, highlights the importance of this planet in the Mayan cosmogony.

Halley's Comet is also represented by a window-shaped opening made in this building to indicate the travel of this celestial body.

How did the Mayans come to have such an accurate knowledge of the sky? How were they able to calculate the movements of the stars with such precision?

These questions remain unanswered and Chichen Itza is far from having revealed all its secrets!

4: The Great Pyramid of Kukulkan was built over another pyramid!

Incredible but true!
The archaeologists have discovered that the Great Pyramid of Kukulkan was actually built over another smaller pyramid (of about 30 ft high) around 550-800 AD.

3: A macabre discovery under the Great Pyramid of Kukulkan

Among the incredible secrets and stories of Chichen Itza’s pyramid, some are worthy of the worst horror movies.

It is common knowledge that the Mayans were a bloodthirsty people. Blood represented life, so making it flow was a sign of strength, of prosperity.

It is more than clear that human sacrifice was a common practice among the Mayans, both from a religious and social perspective. However, what was recently discovered under the Great Pyramid of Kukulkan intrigues archaeologists and researchers. A recent excavation under the pyramid revealed human bones belonging to 90 different people.

According to the first analysis, the bodies found did not belong to the Mayan community nor were they part of a special group of the society. In addition, these bodies showed physical deformities. Men, women and children were sacrificed and buried under the great pyramid. To make matters more sinister, their bones bore marks from what was possibly torture.

Today this mystery remains unsolved. It is unknown why the Mayans were so violent to other human beings.

One thing is certain, if the walls of the Great Pyramid of Kukulkan could talk, they would undoubtedly tell terrible ghost stories.

2: The Great Pyramid of Kukulkan is built over a hidden cenote!

Want more proof that this pyramid is in fact the most sacred and important building in Chichen Itza? 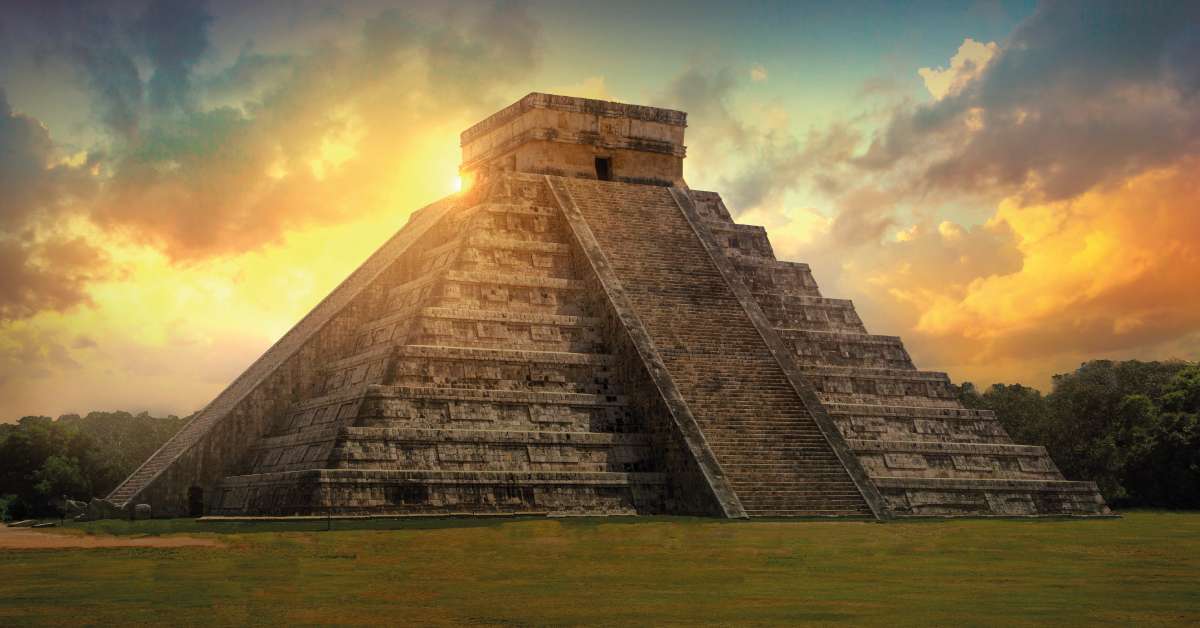 The most incredible secret was discovered very recently, in 2018.

A group of researchers found a very peculiar cavity under the pyramid. Using state-of-the-art tools and cutting-edge technology based on ultrasound and waves to scan the interior of the pyramid and generate a precise 3D image, they discovered the existence of something they never suspected: A cenote! A huge cenote 60 to 90 ft deep that would contain, in volume of water, the equivalent of 6 Olympic swimming pools!

Since the cenotes form a vast network of underground rivers, some archaeologists speculate that there may be an entrance under the pyramid that goes straight to the cenote.

This is possibly the most incredible and unlikely story about Chichen Itza in this article: one day the pyramid could collapse and be swallowed by the cenote below it!

Probably you will have the chance to explore some of the cenotes in Cancun and the Riviera Maya. Many of them are now open to the sky for the simple reason that the dome that covered them collapsed due to the erosion of the limestone soil.

The archaeologists consider this scenario is far from improbable for the Great Pyramid of Kukulkan.

A day will come when the rain will eventually seep into the pyramid's basement. The water will weaken the cenote’s vault and eventually it will fall down.

So, there it is, our 9 most incredible facts about Chichen Itza! These will allow you to have a better understanding of this archaeological site on your next visit or maybe have an interesting topic to talk about with your friends. 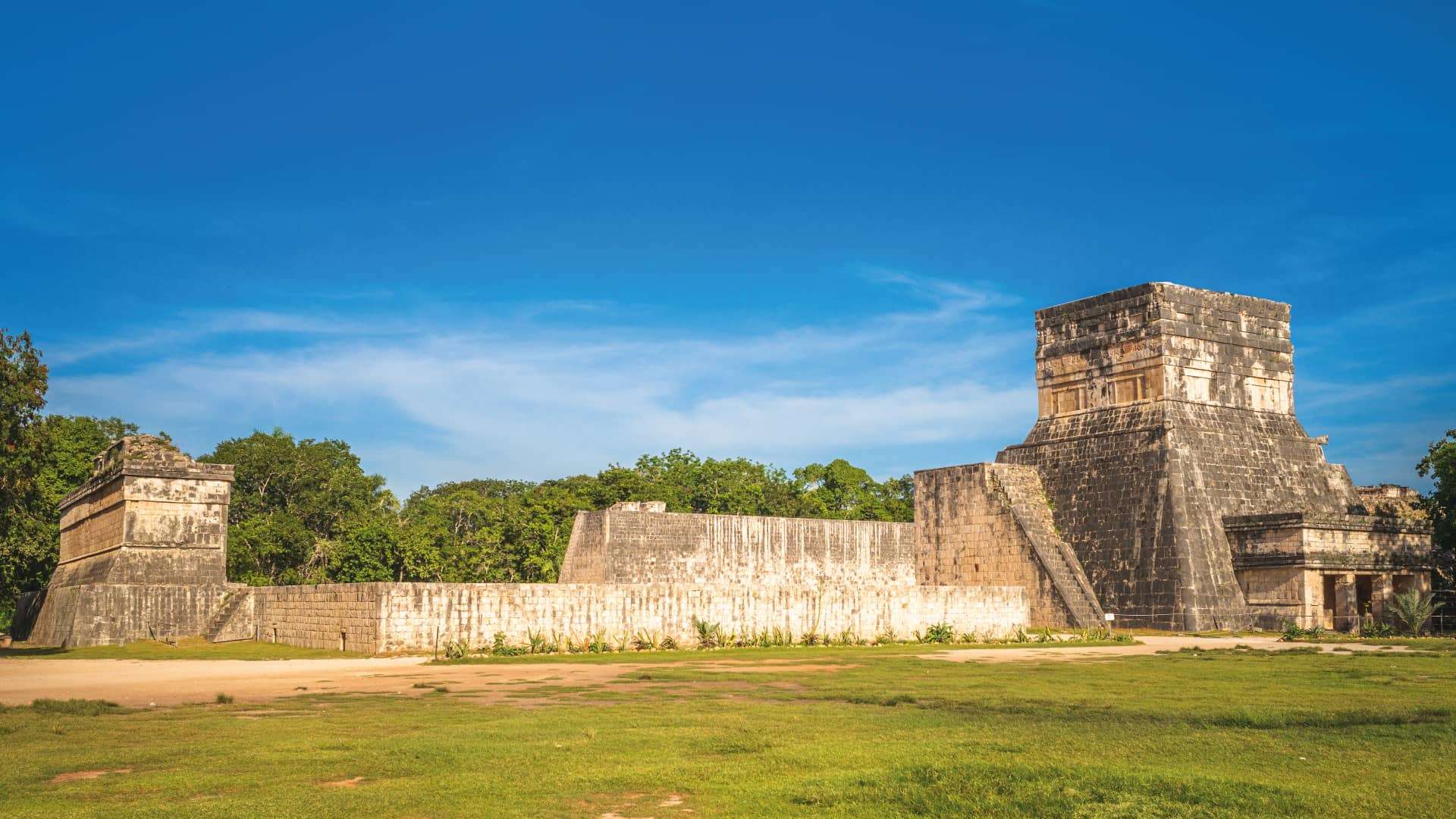 To learn more about Chichen Itza, we recommend our article: The ultimate guide for your tour to Chichen Itza